In March of 2015 I spent 3-weeks in Costa Rica for Pranassage training. Pranassage is a synthesis of yoga and bodywork, and I basically got to be massaged, and give massage for 2 weeks, then relax and learn how to surf for another week in a tropical paradise.  Not a bad gig.

There’s something really special about the town of Nosara where I was staying.  Unless the impossibly rutted dirt roads, occasional poisonous snake encounter or aquatic run-in with a stingray dampers the spirit, I can’t imagine anyone visiting Nosara and not being completely convinced of the magic there. Not just in the lush jungle foliage of this Blue Zone, or the Howler Monkey alarm clock every morning, or the perfect surf on pristine beaches, or every majestic sunset being enjoyed by the local populous as if it were a movie premier. For me the magic was highlighted in the power of manifestation, both intentional and not.

As any good third world country solo adventure should entail, I had some challenges to face. These were not only real world practical challenges such as learning how to drive a manual transmission car to get to and from my daily training on treacherous unpaved roads (because they were out of automatic transmission cars at the jungle rental store).  But there were also internal struggles of encountering the unspoken, rarely faced fears that were rearing inside me and ready to be unleashed.

I have so many vivid memories of fear taking over my body when I was younger. I’ve always had a very active imagination, and as an only child living in the country on our family farm I would often use it to my benefit to entertain myself for hours in made-up worlds.  But my wild mind sometimes got the best of me.

One memory involves being home alone on the farm one summer evening.  I’m not sure what started the fear rising in my mind, but soon I was convinced that someone was going to come to the house to hurt me. I let fear grab me around the throat and hold me pressed with my back against the kitchen wall with a butcher knife clutched in one hand for safety, the other hand sweating profusely. My heart beat could have kept pace with a galloping pony. My imagination had completely convinced both my mind and body that I was in real danger. I didn’t move until I saw my mom’s car come into the driveway.  In fact I couldn’t move, the fear had completely locked me in place.  I was 9 years old.

At an even younger age I would imagine seeing red eyes peering at me through the darkness of night filling my bedroom. Who knows who or what the eyes belonged to, perhaps a bloodsucking vampire.  I think this fear stemmed from a recurring nightmare I had as a child during which a black wolf with red eyes would chase me through the night.  In the nightmare no one could help me because no one else saw it.  For some reason everyone in the dream was also wearing Victorian era clothing, but that’s not important.

Don’t even get me started on the demented activity I knew without a shadow of doubt was happening under my bed.  I would often times worry and sweat myself to sleep.

I also remember being terrified of showering.  How awful!  I would have to peel back the shower curtain multiple times, convinced I would find a maniac laying in wait to kill me at any moment. This wasn’t an isolated incident; it was every time I showered.

I don’t think anyone knew how paranoid and fearful I was as a child. But I eventually grew out of it.  Or so I thought. 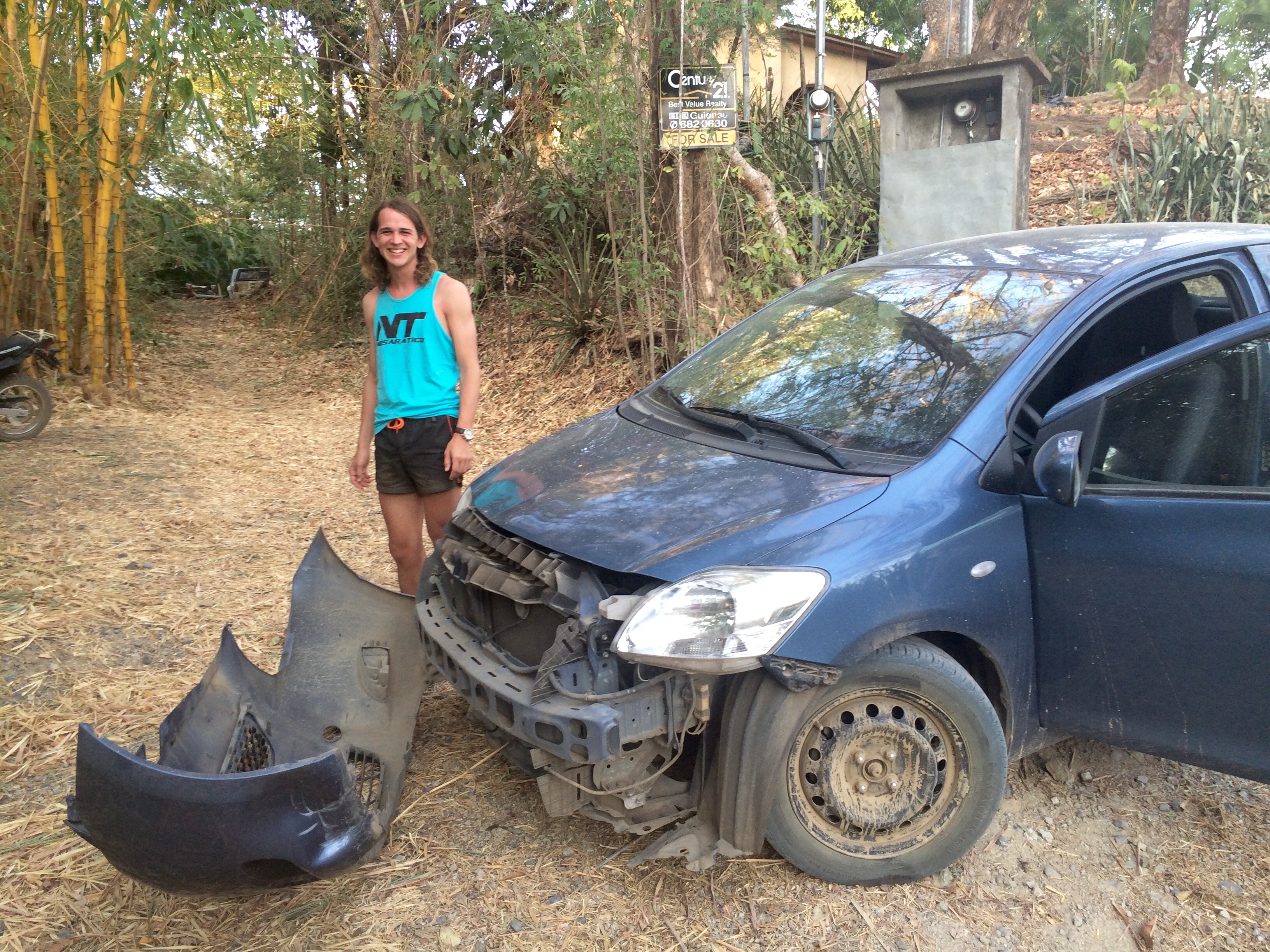 When the front end of the rental car was ripped off from a rut in the road. 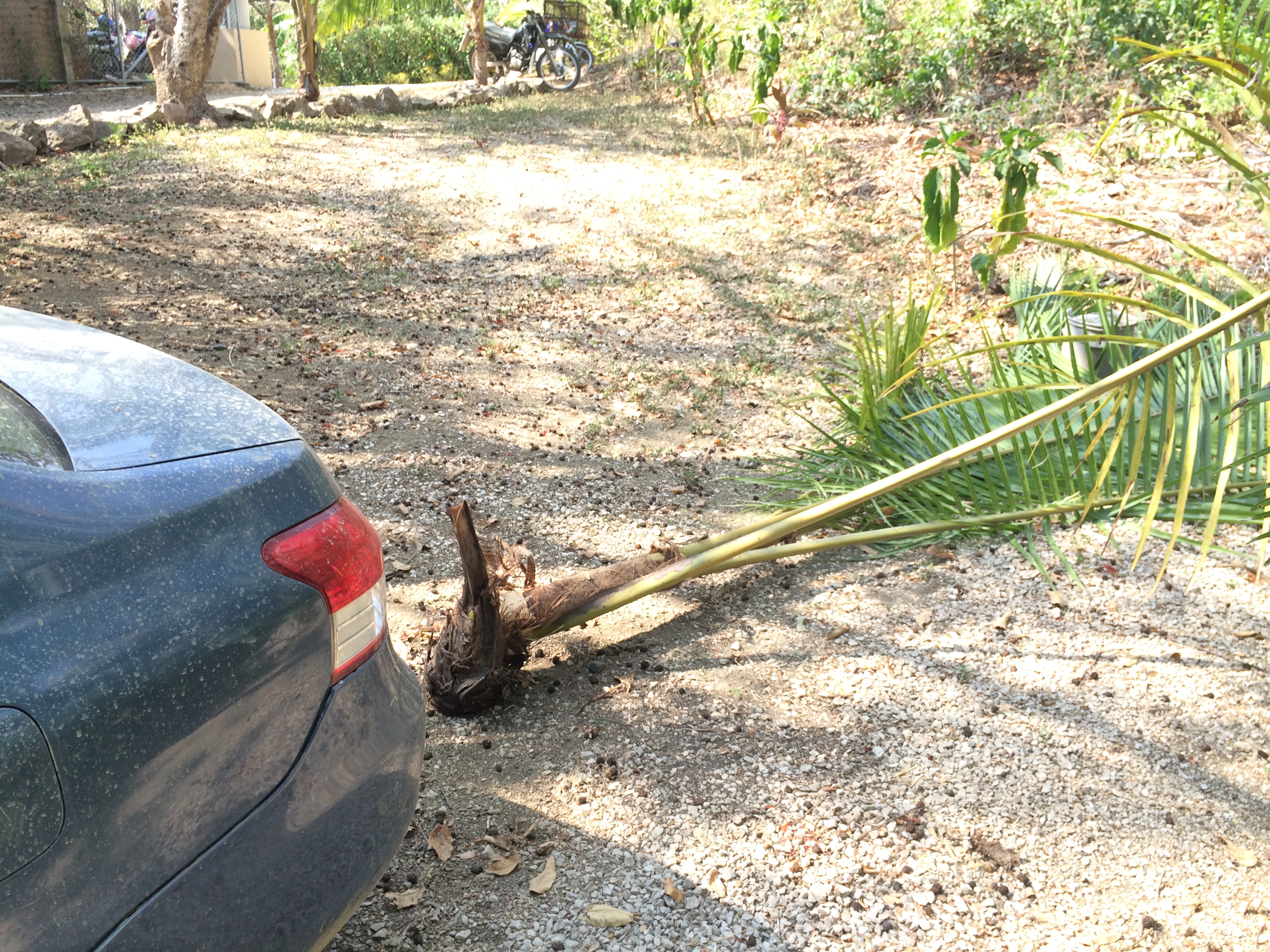 When I accidentilly backed into a palm tree, bringing it to an untimely death 😦
*Not pictured: the three times I locked the keys in the car

I was reminded of my shower delusions while in my early twenties and staying in a hotel in Abiquiu, New Mexico with my boyfriend of the time. We had just smoked weed he had smuggled through airport security by slipping it in the bottom of his sock. Whatever the strain of marijuana might have been, it had me suddenly in a paranoid state. As I felt the high kicking in, I was in the shower, and of course the curtain began to get turned back as I looked for a potential murderer. I made nervous conversation with my boyfriend to stay within my right mind as I hurriedly finished washing my hair.  Of course I never expressed the irrational fear, I just let it keep building and it would pop up occasionally.

One dark night in Nosara (which is every night because there are no street lamps), the very day I was deemed ready to man the stick shift on my own, I found myself taking a wrong turn and in an unfamiliar neighborhood. Which meant I was lost and surrounded by dense jungle. I continued on the wrong route down a slight hill only to find myself in a valley, at an unmarked crossroads.  And then the car stalled, the headlights went off, and I was in complete darkness, all alone. Perfect.

As if having the car stall wasn’t stressful enough to a complete novice driver in a foreign land, I looked outside and as my eyes adjusted to the darkness I noticed that dogs began to encircle the car.  Talk about childhood dreams becoming a reality!  I felt the familiar heat of fear rising from my stomach. My heartbeat was the only sound as the dogs were silent, getting closer and closer, which was perhaps more terrifying and ominous than vicious barking. As I found myself beginning to mentally spiral, instead of letting myself freeze and freak-out, I took a deep, conscious inhale, exhaled all the air out of my lungs, pushed down the clutch and brake and turned the key. I got the car running, turned the car around and made my way back onto the familiar road. I eventually arrived at my friend’s house that I was staying with. After my nerves had settled I realized how strongly my fear had manifested; the sense of doubt I felt, the instantaneous dog pack appearing to add to my anxiety.  And I noticed that instead of allowing myself to move further into despair, I found my breath and was able to release myself from it.

I didn’t just snap my fingers one day and decide that I wasn’t going to slip into paranoid delusions anymore.  It wasn’t an automatic switch from allowing fear to have such a strong grip on me to being completely unaffected by it.  It’s taken years of self-work and a growing awareness to get to this place.  Through yoga training, meditation practice, LOTS of therapy, bodywork and massage, chiropractic work and other healing avenues I’ve explored, I now have tools to use.

And even with all of the self-work I’ve done, it’s still a practice for me every time I encounter fear.  Sometimes the fear manifests as a real-life danger, or something that is buried in my mind and seeping out into anxious thoughts.  Because I’m now in touch with what physical responses I have to certain emotional states, I can pause, notice, and then decide how to take action instead of going down the mental spiral.  Sometimes it works right away, and sometimes I pull myself out mid-spiral.  It’s all learning.  It’s all growing.

I realize that fear is complicated, and it affects all of us differently, and to varying degrees.  It might be so soft and quiet in our life that we don’t even realize it affects us.  Or it might be so loud and obnoxious that it affects us every day.  Whatever the case, I would invite you to move into your fear, instead of hiding from it.  It’s been a life-changing shift for me to no longer be afraid of my fear, but to recognize that it’s a part of me that needs love, acceptance and light just as much, if not more than the rest of me.

If you can’t afford therapy (but do realize there are free therapists out there) or anything fancy, remember that meditation is free, and so is air.  The simplest way you can begin to explore the parts of yourself that may not have seen the light of awareness in quite some time are readily available.

Find a peaceful, quiet place to sit, close your eyes, and just begin to breathe. Let your inhales match the length of your exhales.  Feel a depth to your breath. Take 5 minutes to start.  Everyone has 5 minutes to spare.  Work your way up to 10, 20, 30 minutes as you practice daily.  Notice what comes up for you.  If you find it difficult to just sit, there are free guided-meditations online.  So many you could spend the rest of your life just listening to them.  And then be reincarnated and do it all over without listening to the same one twice.

My fear used to make me lie. It made me push away the people that I loved the most.  It made me invite people into my life that didn’t treat me well, and make choices that weren’t healthy.  I would never consciously choose these things for myself, they sound terrible! But after years of eluding my fear, my Big Bad Monster made me do it.  Good, excuse, huh?

And when I finally took the time, and faced my Big Bad Monster, it turned out to be a scared, lonely little girl deep inside of me.  I had left her in the dark for so long, avoiding her and being afraid of her, that she was screaming out for attention.   I see her now, I understand her, and she’s finally getting the attention and love she always wanted from me.  Once the light of awareness shines, the monster under your bed might not be so scary after all.

As a little girl, my mom read to me most nights as she was tucking me into bed. One of my favorite books, and one that still holds a lot of meaning for me, is The Monster at the End of this Book.  It’s a good summary of how our deepest fears can take on monumental proportions, and how they don’t need to be so scary.  I would HIGHLY recommend you check out this animated reading of the book here https://www.youtube.com/watch?v=uf6U9vH5ovI
Sleep tight, don’t let the bed bugs bite 🙂 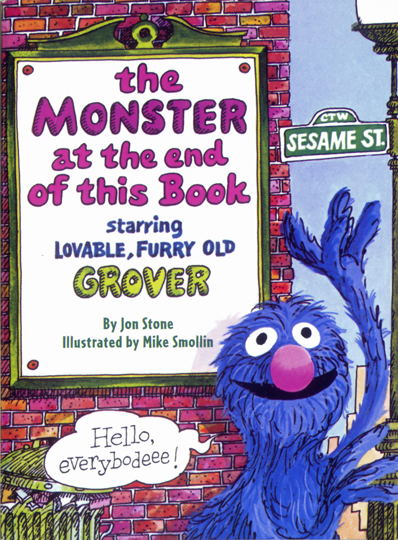 View all posts by sofiarad